McBroom and Mack are pictured before a sculpture that was given to the former senator by Michigan Technological University. Mack’s family lent the sculpture to McBroom for display in his Lansing Senate office. The gentlemen are seen holding a vintage magazine featuring an article about Sen. Mack in which the sculpture is also pictured.

The article, titled Senator Joe Mack, the Hard Hat of the North Woods, in part covered his work on forestry, mining and other natural resources issues.

“I would like to thank the Mack family for allowing this piece of history to be displayed once again in the U.P. state Senate office,” McBroom said.  “Like this giant sculpture of the Upper Peninsula, Sen. Mack was larger than life and represented his constituents with passion and dedication on issues that were critical to the U.P.”

Gary said some of the family questioned whether the late Democrat senator would approve of McBroom, a Republican. Mack said, “I told them that McBroom works for the U.P. and is almost as conservative as dad, so it would be OK.”

The son of a miner, Mack was raised in a family of 10 children. He graduated from Luther L. Wright High School and went on to the Milwaukee Vocational School to study steel fabrication. During the war, he worked on the Manhattan Project in development of the A-bomb. He returned to Ironwood in 1946 and soon after became active in elective politics

Mack was elected to the Michigan House of Representatives in 1960. He served two terms in the House of Representatives, and, with his election to the Senate in 1964, went on to serve a total of 30 years in the Michigan Legislature. Highlights of his career in the Senate included his chairmanship of the Upper Peninsula Industrial and Economic Affairs Committee and Senate Natural Resources Committee and his service as a member of the Senate Appropriations and Retirement Committee. Mack died in 2005.

“Joe Mack is remembered as a steadfast champion of the U.P., its people and our way of life,” McBroom said. “His hard work and efforts on behalf of developing natural resources, outdoor recreation, economic development, and the rights of the individual earned the respect of his peers and, above all, the deep and sincere gratitude of the working men and women of the Upper Peninsula.”

McBroom encouraged U.P. residents visiting the state Capitol to stop by his office to view the sculpture. 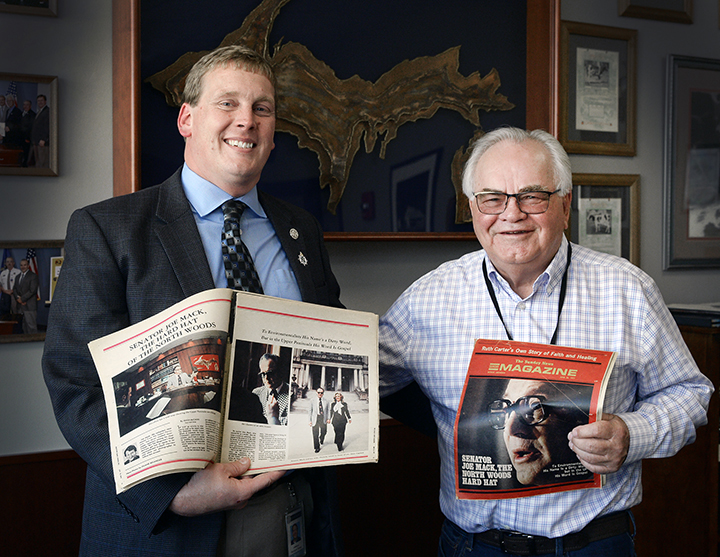